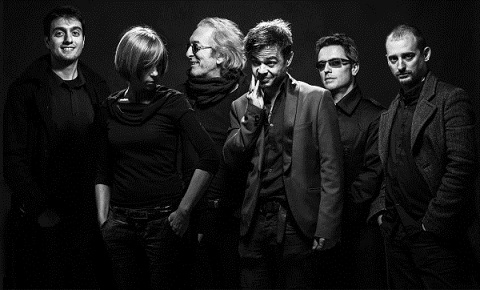 Born in 1989 on the surf of the second progressive wave, the Syndone – led by Nik Comoglio – have passed their first quarter-century through the whole of niche music undergrowth. Five albums of great value (Spleen / 1990, Inca / 1992 Melapesante / 2010, La Bella is the Beast / 2012 and Odysseas / 2014) who crossed the prog. contaminating it with tones that, in most cases, has exceeded the codes and frontiers. Their sound – in some ways very close to the moods of Emerson Lake & Palmer – is not limited to a slavish re-reading of the English combo but tends to revitalize the spirit with formulas that are beyond the outright style to land to new shores, to new sounds characterized by a rock texture with large classical openings (sometimes let string orchestra) all tied together by a very expressive voice and theatrical traits that unites all in an original, cultural and innovative. If their name was at first put off the Holy relic (and all its trappings) kept in Turin, we can say that, at the same time, also brings to mind the disturbing magic of the capital of Piedmont. Syndone is the band that tries to revive the progressive rock in the Italian and European scene in an attempt to reduce the age of the genre but at the same time remaining firmly tied to its cultural roots. The new album is produced by Eros & Thanatos Fading Records of Milan and is testimony to the continued evolution of the band also in the record industry. “Ours is a very expressive music, at very symphonic traits, so much so that sometimes I call it” rock Movie “! The film figure of some orchestral passages rests on concept idea (that lives of refrain and themes that run), not a segmented speech unrelated songs to each other. The concept represents the progressive tradition, it is right for us to adhere to the classic styles of respect for the genre, but the underlying principle of Syndone since their birth is to always go beyond”. Line up: