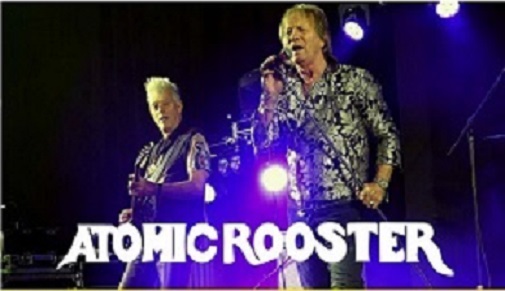 With the blessing of Vincent’s widow, Jean, French and Bolton were contacted by Rock Artist Management’s Peter Barton and Gary Marks to put the band back together, a daunting task without Crane himself present, however, along with adding a bassist and a new drummer, the impossible has been achieved.

There is a feeling of wonder and incredible excitement listening to songs like Death Walks Behind You and Tomorrow Night, which still have the same charm and relevance after over 40 years and French and Bolton still perform them with no apparent fatigue and with new recruits the Atomic Rooster have returned to a very high musical level.

French and Bolton brought an incredible catalog of music back to life, because Rooster were one of the most important British prog rock bands of the 1970s with much of their success owing to Hammond organ master Vincent Crane.

The band had 18 successive line-up changes and Crane was the only constant member so his sad demise in 1989 basically marked the end of the band … or not?

Of course, there will be the usual complaint that none of the original band members will be on stage. So? Two of them were in attendance when the Roosters were at the height of the 1970s and only Crane’s absence threatens to boost the credibility of the current lineup. But aside from him, this is the real Rooster!