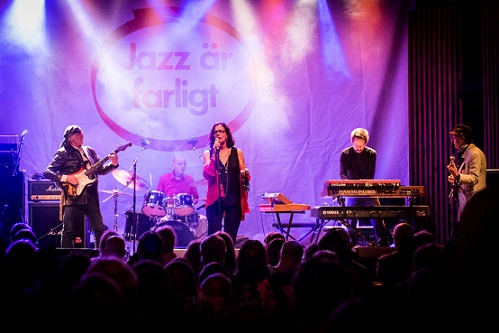 Esoteric atmospheres and tribal percussion, nightmare sounds and lysergic visions from the deepest underworld of rock. All this coexists in the music of Amon Düül II, the most “obscure” formation of the German avant-garde between the sixties and the seventies. The original core of the band is formed in Munich, in an anarchist-freak municipality part of the international anti-war movement, where free-rock recording sessions are organized between free love and psychedelic drugs.

In the formation, originally called only Amon Düül and somewhat precarious, there is soon a split: on the one hand the Amon Düül I, with the Leopold brothers (Peter and Ulrich) and Rainer Bauer; on the other, Amon Düül II, with Chris Karrer, John Weinzierl, Falk Rogner and singer Renate Knaup-Krotenschwanz.

But soon the Amon Düül II took over the “cousins”, thanks to more complex and elaborate sounds. Weinzierl and partners establish themselves as the standard bearer of that kraut-rock that explodes in Germany with groups like Can, Tangerine Dream, Ash Ra Tempel. First they propose a free form of psychedelia and an eclectic style, in which acoustic, orientalizing and electronic sounds are noisily mixed. But soon their sound becomes more complex, giving rise to a sort of pagan and naive “rock opera” that imposes the band to international attention.

It is a very numerous formation that gives away to the first disc set by Amon Düül II, Phallus Dei. The work contains four tracks plus the long final 20-minute title track. The title track is a sort of “acid nirvana”, achieved through a sound orgy close to those of the Velvet Underground. The instruments play uncoordinated and dissonant, first of all the violin (the instrument of the devil), which together with organ and choirs seems almost to lead in an ideal journey in the circle of the damned. It will soon become one of the cult albums of the whole German kraut-rock vein!

The next Yeti takes up this curious experiment, combining quotes by Frank Zappa and “poor” electronic, oriental sounds and psychedelic. Dance of the Lemmings (1971) further accentuates the “lysergic” dimension: more or less harshly filtered guitars, ethnic percussion and electronic experimentalism. Everything is done to push the listener to a psychedelic exploration that takes him to distant spaces, unconsciously. A bit like the Popol Vuh that – as in a municipality – shared some musicians with the Düül II. They have recorded over 20 records during their long and tormented history.

Since 2001 the band has gathered to hold a series of concerts in Europe and the United States. Meanwhile, the music of Amon Düül II has become fertile seed for a multitude of bands dedicated to the rediscovery of “kraut-rock”, from Stereolab to Tortoise, from Julian Cope to Mouse on Mars. But it can be said that the dark and “luciferin” nature of their sound has somehow influenced the gothic-rock movement.