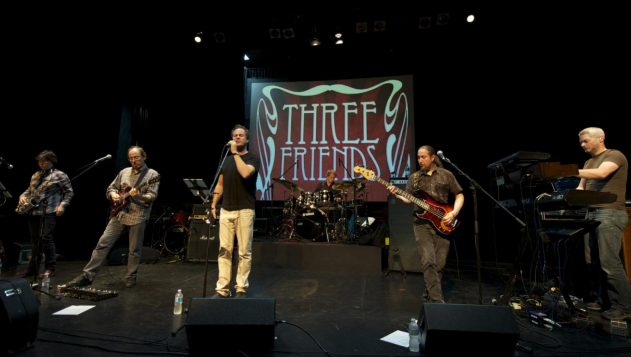 In October 2008, Gary Green (founder of Gentle Giant) and Malcolm Mortimore (a member of the
same group) are planning a new group called ‘Rentle Giant’. It consists of 5 members and debut
Oct. 17 in England with a repertoire dedicated to the mighty GENTLE GIANT.
But soon they also join Kerry Minnear another of the important members of the original group and
soon they change the name of the band that, at that point, could only be called THREE FRIENDS
as the title of one of their album of the seventies.
Since 2009 they have started to turn all around the world to propose again the splendor of a group
which was in fact one of the most important group in the history of prog , still considered a parent
of that kind of music, that is GENTLE GIANT.
Their ladders prefer definitely the most creative and innovative period of Gentle Giant and aims,
among other things, on some songs that have never been part of the band’s live repertoire not
even the original band.
Immediately affects the extreme actuality of a music too hastily archived and snubbed: a music that
sounds absolutely contemporary and does not show in any way the sign of the times, which leaves
no room for any kind of nostalgic interpretation.
The arrangement of the songs respects the original layout of the same and showcases the
excellent qualities of all the musicians.
In late 2009, Kerry left the band for personal reasons, but now the new project has come to life.
The contemporary rock of THREE FRIENDS, redesigned by Gary and Malcolm in the lineup with
the addition of keyboardist Gary Sanctuary, has been appreciated all over the world.
The giant has not been awakened, more simply, old friends decided to tell the ancient magic, with
the same philosophy of the time.
BAND
Gary Green (guitar, voice)
Malcolm Mortimore (drums)
Lee Pomeroy (bass)
Mick Wilson (voice)
Gary Sanctuary (keyboards)
Charlotte Glasson (violin)
(text loosely based on the book “GENTLE GIANT , I giganti del prog-rock” by Antonio Apuzzo
published by Alternative Press): thank you Antonio!