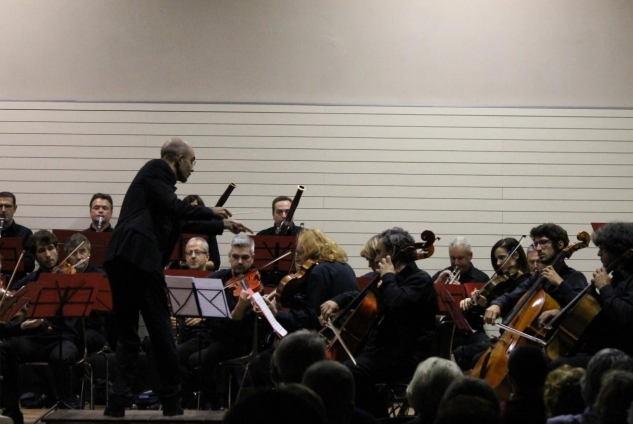 Every year, the symphony concert of the Musical September Verunese offers important moments of the
repertoire, great symphonies, great composers. Over the years some Beethoven symphonies have been
included in the program: this year it is the turn of the Eighth. The Eighth Symphony is a magnificent
example of how the small size, the ‘less’, can be translated into a ‘More': after great symphonies such as
the Eroica, the Fifth, the Pastorale, the Seventh, comes this very shorter symphony, which pays homage
to the past, here and there, winking to Haydn and resuming the Minuet (which Beethoven himself had
replaced with the Scherzo). Really it is a masterpiece of great concentration and richness, as if Beethoven
had wanted to keep the complexity and density of the previous symphonies but compressing into a short
duration.
The size of Beethoven’s Eighth allow you to push up against the Third Schubert which was composed in 1815 (in the same Vienna where Beethoven lived) by a Schubert, eighteen year old, who still did not know
much of Beethoven and certainly did not know the Eighth Symphony which had been written shortly
before. In this symphony fascinates the presence of all the language features Schubert’s, precocious
talent, who seems to have an innate taste for melody and the rhythmic verve, with distinctively Viennese
refers to the world of dance and of Lied. The world of music by Schubert was still not in the path of the
annual concert of September in Veruno and this Third Symphony he is a worthy representative.
Alessandro Maria Carnelli
Over the last few years Alessandro Maria Carnelli debuted at the Musikverein in Vienna in the season of
the Wiener Concert-Verein Orchestra, directed the ensemble of the Teatro Regio in Turin (Histoire du
soldat by Stravinsky), has been in France for a three- concerts and has directed several times the
orchestra of I Pomeriggi Musicali di Milano (Teatro Dal Verme and Stagione Estiva) and the 1813
Orchestra of the Teatro Sociale in Como. He has given concerts at the Sala Verdi in Milan and the
Palazzo dei Congressi in Stresa.
His collaboration with CPI (Cantori Professionisti d’Italia) has led him to work with internationally
renowned singers such as Alessandro Corbelli, Gemma Bertagnolli, Pietro Spagnoli. The collaboration
began at the Teatro degli Arcimboldi in Milan and then continued with other concerts.
Since 2004, enjoys the support of the Foundation Salina part of a program for young talents, a rare
example in Italy of private support for long-term training, through which participates annually to the
season of the Fondazione in Arona. He was an assistant to Umberto Benedetti Michelangeli at the
Orchestra Sinfonica Giovanile of the VCO which has more times directed in concert. He also has
collaborated with the Conservatory of Novara for the execution of works by young composers.
Alessandro Maria Carnelli has studied conducting at the Vienna 2000-2004 Musikseminar of Vienna with
Erwin Acel, and then perfected in numerous courses and masterclasses including in St. Petersburg,
Florence and the summer master classes at the Royal College of Music in London and in 1999 he
obtained a scholarship of the Foundation of the Wagner Festival in Bayreuth. His training also includes his
piano diploma, degree in musicology and composition studies and Baroque organ. It ‘also the author of
monographs on Mussorgsky, Tchaikovsky, Shostakovich and Schoenberg published by Skira and
published on the Corriere della Sera.