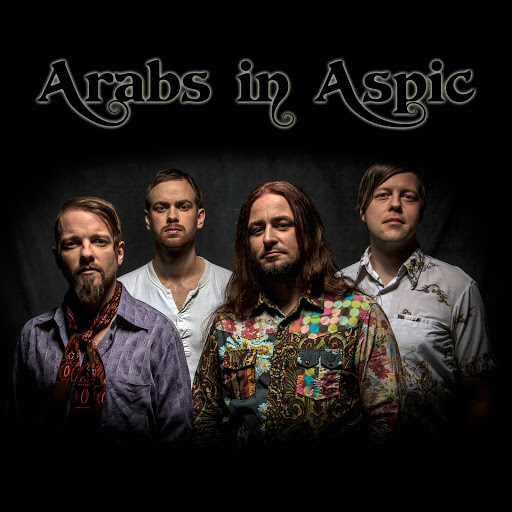 ARABS IN ASPIC emerged in 1997 from Norway led by guitarist and vocalist Jostein Smeby and rythm guitarist & Theremin player, Tommy Ingebrigtsen. Since they met through their common love for 1970s heavy rock music, especially Black Sabbath, they’ve been playing together with different personnel, each playing different kinds of heavy music until Arabs in Aspic surged. The first permanent band members were Eskil Nyhus and his brother, bass player Terje Nyhus. They said goodbye to playing covers and had their first release, the EP “Progeria” on their own label in 2003. The year after, the band was ready with Hammond organ player Magnar Krutvik, and released “Far out in Aradabia”. The band was later joined by Stig Arve Jorgenson on backing vocals and Hammond organ, as Magnar changed to playing acoustic guitar and synth. In 2006 Jostein, Eskil and Stig hooked up with bass player Erik Paulsen and formed what was briefly known as Arabs in Aspic II. The new spirit and musicianship led to some serious song writing, and numerous demos were recorded during the following years. In 2009 the band entered TNT guitarist Ronni LeTekro’s studio Nyhagen, Toten and recorded the critic awarded “Strange Frame of Mind”. Before the vinyl release of “Strange Frame of Mind” in 2010 they decided to cut the “II” in the band name and go back to just Arabs in Aspic. In 2011 Arabs in Aspic signed with Black Widow Records and in 2012 the band recorded “Pictures in a Dream” in their own studio. This session featured legendary vocalist Rune Sundby of the 70’s progressive band “Ruphus” on two songs. Enjoy!